Start a Wiki
The wedding of Prince William, Duke of Cambridge, and Catherine Middleton took place on 29 April 2011 at Westminster Abbey in London. Prince William, the eldest son of Charles, Prince of Wales, first met Catherine Middleton in 2001, when both were studying at the University of St Andrews. Their engagement on 20 October 2010 was announced on 16 November 2010. The build-up to the wedding and the occasion itself attracted much media attention, with the service being broadcast live around the world, and being compared and contrasted in many ways with the 1981 marriage of William's parents, Charles, Prince of Wales and Lady Diana Spencer. Much of the attention focused on Kate Middleton's status as a commoner (i.e. not a part of the aristocracy) marrying into royalty.

As Prince William was not the heir apparent to the throne, the wedding was not a full state occasion and many details were left to the couple to decide, such as much of the guest list of about 1,900. It was a public holiday in the United Kingdom and featured many ceremonial aspects, including use of the state carriages and roles for the Foot Guards and Household Cavalry. Hours before the service, the Queen conferred the titles Duke of Cambridge, Earl of Strathearn, and Baron Carrickfergus upon William. Upon her marriage, Middleton therefore became Her Royal Highness The Duchess of Cambridge. The ceremony was attended by most of the Royal Family, as well as many foreign royals, diplomats, and the couple's chosen personal guests.

Middleton wore a white dress by British designer Sarah Burton, as well as a tiara lent to her by the Queen. Prince William wore the uniform of his honorary rank of Colonel of the Irish Guards. William's best man was his brother, Prince Harry, while the bride's sister, Pippa, acted as her maid of honour. The wedding ceremony began at 11:00 am John Robert Hall, the Dean of Westminster, conducted the service, with Rowan Williams, the Archbishop of Canterbury, conducting the marriage ceremony itself and Richard Chartres, the Bishop of London, giving the sermon. A reading was given by the bride's brother, James. After the ceremony, the newly married couple travelled in procession to Buckingham Palace for the traditional appearance on the balcony and a flypast before crowds assembled in The Mall. Later the Prince drove his Duchess the short distance to Clarence House in his father's classic Aston Martin DB6 Volante, decorated by Prince Harry with a number plate "JU5T WED".Following the wedding, the couple intend to continue living on Anglesey in North Wales, where Prince William is based as an RAF Search and Rescue pilot.

Over 5000 street parties were held to mark the Royal wedding throughout the United Kingdom and one million people lined the route between Westminster Abbey and Buckingham Palace. In the United Kingdom TV audiences peaked at 26.3 million viewers with a total of 36.7 million watching part of the coverage. The ceremony was viewed live by tens of millions more around the world including 72 million on the YouTube Royal Channel. 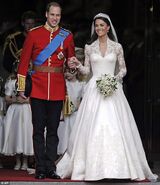 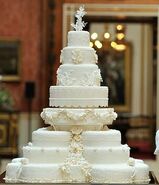 Add a photo to this gallery
Retrieved from "https://britishroyalfamily.fandom.com/wiki/Wedding_of_Prince_William_and_Catherine_Middleton?oldid=4359"
Community content is available under CC-BY-SA unless otherwise noted.